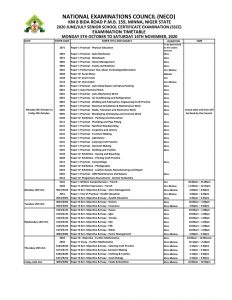 The National Examinations Council (NECO) on Tuesday released the timetable and guidelines for the conduct of its 2020 examinations for Senior Secondary School Certificate Examination for students in exit class.

Professor Godswill Obioma, Registrar of NECO announced the release of the timetable at a press briefing at the Council’s Headquarters in Minna, Niger State.

He explained that the council is exploring the possibility of installing CCTV cameras in all its examination centres and custodian points.

According to Obioma, NECO SSCE would begin on October 5 and end on November 18.2020.

He added that NECO Basic Education Certificate Examination (BECE) will hold between Monday, August 24 and September 4, while the National Common Entrance Examination for Junior Secondary School into the Federal Unity Colleges would hold on October 17.

The registrar added that NECO examination officials would be made to sign an oath of allegiance as a requirement to participate in their respective roles and responsibilities.

“Student and pupils preparing to sit for our examinations are advised to study very hard and avoid the temptation of wanting to cheat during the examination as the council has zero-tolerance for examination malpractice.

Chukwuemeka Nwajuiba, the Minister of State for Education, who made the announcement on July 29 in Abuja after a series of meetings with chief executives of examination bodies in the country, revealed that NECO examination will start on October 5 and end on November 18.

According to him, the National Business and Technical Examination Board (NABTEB) examinations will start on September 21 and end on October 15.

“Other details of the schedule indicate that the Senior Secondary School Certificate Examinations, for SS3, conducted by NECO will start on October 5 and end on November 18, 2020,” he said.

He explained that the Basic Education Certificate Examinations (BECE) for JSS 3 students, also conducted by NECO, will start on August 24 and end on September 4. 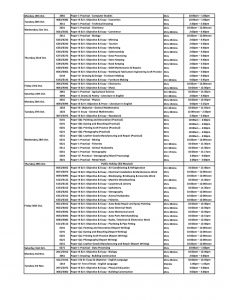 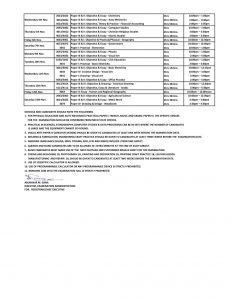 The National Universities Commission, NUC has given formal approval for the commencement of Medicine and Surgery, MBBS programme by the Federal University of Technology Akure […]