Comr. Kikiowo Ayoade was present as a Panel Member at the “Vote Not Fight advocacy training” organised by the Pacesetters and supported by National Democratic Institute (NDI) and the United State Agency for International Development (USAID)

The NAOSS president contributed on the triggers of electoral violence citing traditional political beliefs that elections cannot be free and fair in Nigeria, amongst other factors as the major cause. 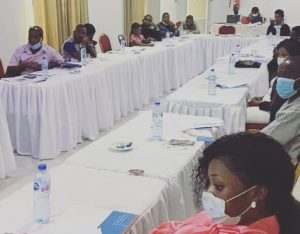 While engaging the audience, he narrated how people already have the established mindset that the democratic system is buyable and widespread poverty has made it sellable

A project that will engage major stakeholders and candidates from all political parties in the Ondo Gubernatorial election and make public their positions, ideas and politics to the youth demography.

“I implore the Independent National Electoral Commission (INEC), security agencies, political parties and candidates in the 2020 governorship election to play by the rules, uphold electoral integrity and forestall violence. The political class must shun violence as a tool.”

He applauded the fluency of the Vote Not Fight campaign citing that it’s voice was beyond relevant to assure a violence free election in the state.