A graduate of Imo State University has broken an academic jinx that has existed since the university’s history. 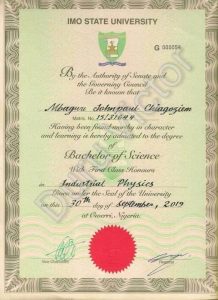 Mbagwu Johnpaul Chiagoziem of the department of industrial physics graduated with a 4.51 CGPA in a 5.0 grading system to break the 39-year-old academic record in IMSU, as far as the department is concerned.
This is as the department of industrial physics in Faculty of Sciences, gathered to be as old as IMSU itself, has never had a first class graduate until Mbagwu Johnpaul Chiagoziem.
Receiving his statement of result on Monday, November 9, 2020, the Imo indigene of Isiala Mbano descent said it wasn’t easy studying physics.
In an exclusive chat with COMR. DURU VICTOR, Johnpaul narrated how he turned the negative rhetorics of his coursemates and senior colleagues into a motivation.
“…My coursemates and senior colleagues do say [then] no one can graduate with first class. I told them I’m a different person, that I will graduate with that [first class] by God’s grace.”
True to his declaration and confession, he graduated with a First Class Honours as can be seen in his statement of result.
The scholar, who has an impressive 10 research papers to his credits, said his lecturer’s challenging words formed part of the bedrock to achieving this feat.
His lecturer Prof. T.C. Chineke, according to him, each passing day will say to me, “Johnpaul, hope it will be a first class?” and he usually responds, “Prof, by God’s grace I will break the record in this department.”