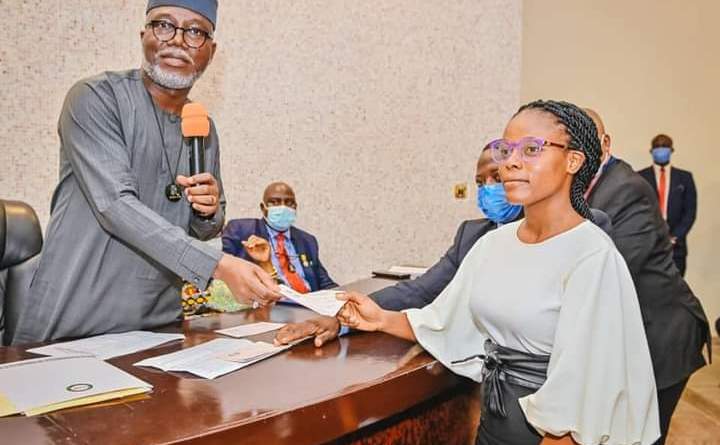 At least 7449 Students of Ondo State Origin in various tertiary institutions in Nigeria have benefited from Ondo State Bursary/Scholarships award as part of the activities marking the 100 days in office of Gov. Akeredolu’s second term administration.

Ondo State Governor, Arakunrin Oluwarotimi Akeredolu who was represented by his deputy, Lucky Aiyedatiwa made this known at the flag off ceremony of disbursement of bursary/scholarship to students of Ondo State origin in all public tertiary institutions in the in Nigeria.

The Governor said a total number of 7449 students of Ondo State origin in tertiary institutions in Nigeria are to benefit from the sum of #91 million approved to the bursary and scholarship award for this year.

He added that the awards are clear means of telling the students that Ondo State cares for their welfares.

He reiterated that scholarship awards for students of Ondo State origin in tertiary institutions living with disability is automatic.

He said further that Akeredolu’s administration will not relent in providing quality education for the youths of Ondo State in view of ensuring that they can compete with their peers in other states of the federation.

The Governor congratulated the beneficiaries of the bursary/scholarship awards and advised them to spend the money wisely by channelling towards their academic pursuit, and also charged them to shun all forms of social vices that could destroy their future.

In his vote of thanks, the Global President of National Association of Ondo State Students (NAOSS), comrade Kikiowo Ayoade appreciated the effort of Arakunrin Oluwarotimi Akeredolu “for his unconditional approval of the bursary allowances of students of Ondo State origin, which he said will further ignite the confidence of Ondo State Students that His Excellency is truly Mr. Talk and Do.

The NAOSS 001 also appealed to the state government to approve the deduction of association five hundred naira due from source, as this due is necessary for taking care of the welfare of Ondo State Students across the 36states of the federation.

He also pledged the unflinching and unbridled support, loyalty and understanding of the entire Ondo State Students to Akeredolu’s administration.

UNIVERSITY OF JOS,(UNIJOS) Hires Hunters To Protect Campus And Hostels